Yes women have come a long way – NO I do not need a condescending pat on the head to remind me.

We, women, should be free to choose what we wanna do/be/go/marry/love.

There is still a substantial difference between male and female employees.

Only five percent (5%) of S&P 500 companies have female CEOs, And it’s not much better at other leadership

levels. Only 11% of top corporate earners are female, 21% of board members are women, and women only

Parents in certain countries still only push for sons to be educated but neglect their daughters’ ambitions.

Don’t look that far, this could be happening right next to you.

The #MeToo movement finally gave a voice to women on the abuse and harassment they suffer.

instilling some sort of animal instinct in men.

Here,I’m also talking about the male-dominated idea that women should all be girly-pinky-silly.

Cultural change is impossible without support.

And What do you mean by “support”?Support in this instance means encouragement from both men and women that we can work together to accomplish big things.

The idea is neither to let down the achievements made by men nor overrating the feminine accomplishments, the basic ideology is to create a more balanced world where both the genders can work together in a similar work environment taking inspirations from each other’s work and capabilities.

Till then women all around the world need to continue the vocal fight for equality.The road is still long, but we can do this.

As a Woman,we have to juggle priorities and responsibilities, but these situations help us to grow stronger. To all the beautiful strong women out there…don’t think you have to go it alone. Seek support – networking with other women and men. We must be brave to express our needs.

Leaving you with a beautiful thought …

No one can make you feel inferior without your consent.
-Eleonor Roosvelt 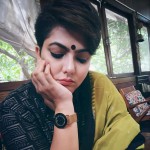 When being strong is the only choice …

Is menstruation a taboo ?

The temple of feminine power-Kamakhya